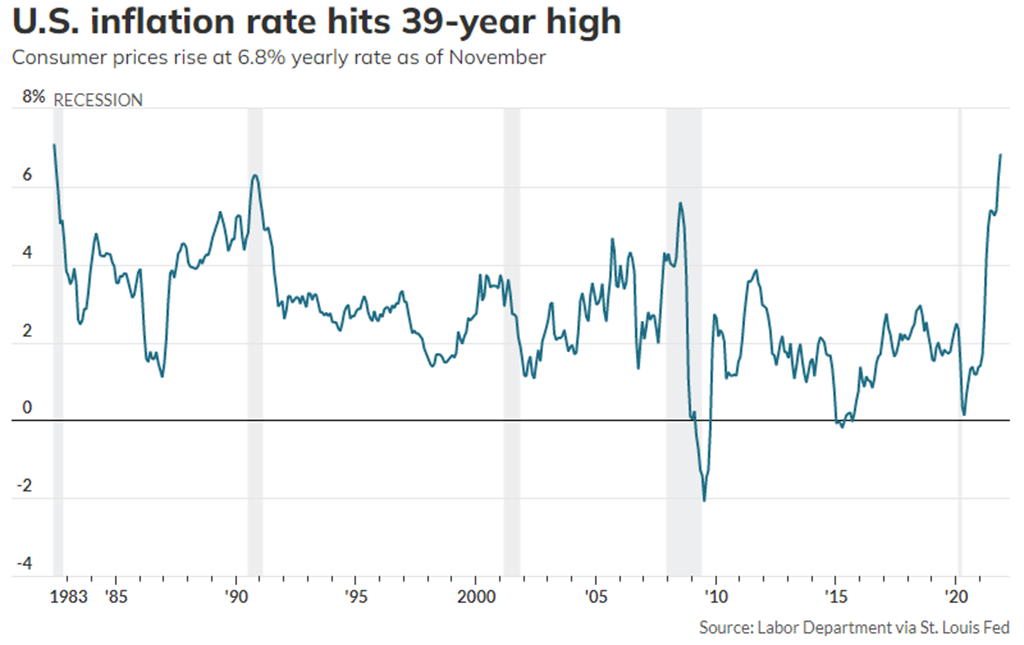 The numbers: The cost of living climbed again in November and drove the rate of U.S. inflation to a nearly 40-year of 6.8%, putting more pressure on households as they confront rising prices of gas, food, cars, rent and so forth.

The pace of inflation over the past year escalated to 6.8% from 6.2% in the prior month. That’s more than triple the Federal Reserve’s 2% target and is the highest rate since July 1982.

A string of higher-than-expected inflation readings since the summer is likely to push the Fed to speed up plans to phase out stimulus for the economy by the early spring, several months earlier than it had planned.

Top central bank officials meet next week to plot their next step.

Worried about the economic and political consequences, the White House has also moved to try to help untangle knots in the U.S. supply chain that are contributing to high inflation. Many goods and materials are in short supply and prices have risen as a result.

Another closely watched measure of inflation that omits volatile food and energy costs jumped 0.5% last month. This so-called core rate is closely followed by economists as a more accurate measure of underlying inflation.

Soaring inflation is outstripping the biggest increase in worker wages in decades. Inflation-adjusted hourly pay was 1.9% lower in November compared to a year ago. Paychecks aren’t buying as much as they used to buy.

Big picture: The stunning surge in U.S. prices this year could peak in the next few months as supply-chain bottlenecks are gradually undone, but high inflation is likely to last well into 2022.

Rents are moving up again, for one thing, and wages are rising at the fastest pace in decades and adding the underlying cost of doing business.

The big unknown is how much inflation slows. The Fed predicts the rate of price increases will fall below 3% toward the end of 2022, but some economists think inflation won’t recede so quickly.

So far most investors are siding with the Fed. Stocks are rising and Treasury yields are still extremely low. Bond yields would likely rise a lot higher if investors were very worried about inflation.

Key details: The cost of rent rose sharply in November for the third month in a row and is adding to the tailwind behind inflation.

Rents had been relatively stable during the pandemic, but they have risen 3% in the past year and are likely to keep climbing. Shelter is the biggest expense for most households.

The cost of gasoline jumped 6.1% in November. Fuel costs about 60% more than it did a year ago, but consumers could get a break in the next few months. Prices have fallen in the past few weeks and could decline even further.

Food prices rose 0.7% last month and show little sign of letting up. The cost of groceries have climbed 6.4% in the past year, the biggest increase since 2008.

The only notable price declines were in auto insurance and recreation.

What they are saying? “U.S. inflation was even hotter than expected in November and is now running the fastest in nearly four decades, with little near-term relief in sight,” said senior economist Sal Guatieri of BMO Capital Markets.

“The Fed has little choice but to accelerate tapering and prepare for the possibility of much earlier rate hikes than it was planning just a few months ago.