Amidst the wild and devastating weather week, drought mostly held at status quo. The West saw some improvements, and the Southern Plains saw degradations, with mostly small changes elsewhere. As of December 14, 2021, 46.2% of the U.S. and 55.1% of the lower 48 states are in drought. 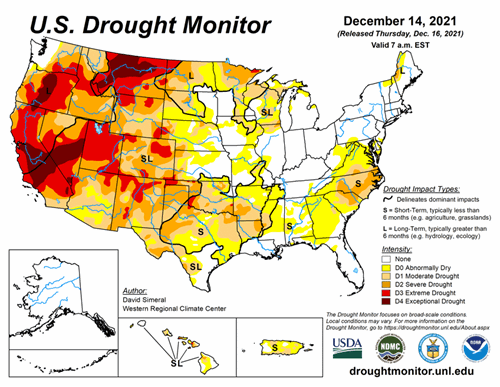 The CPC 6-10-day Outlooks calls for a moderate-to-high probability of above-normal temperatures across the southern half of the conterminous United States excluding California and Nevada. Below-normal temperatures are expected across the remainder of the West including the Pacific Northwest and the Northern Rockies. In terms of precipitation, the wetter-than-normal pattern is expected to persist across the western U.S., while there is a low-to-moderate probability of below-normal precipitation across the Central and Northern Plains as well as across most of the South. In the eastern third, near-normal precipitation is expected.