It's December and drought in the United States is worsening. Parts of the Southwest across to the Southeast saw little to no precipitation in the last week, or in all of November, leading to drought degradations. As of November 30, 2021, 44.8% of the U.S. and 53.4% of the lower 48 states are in drought. 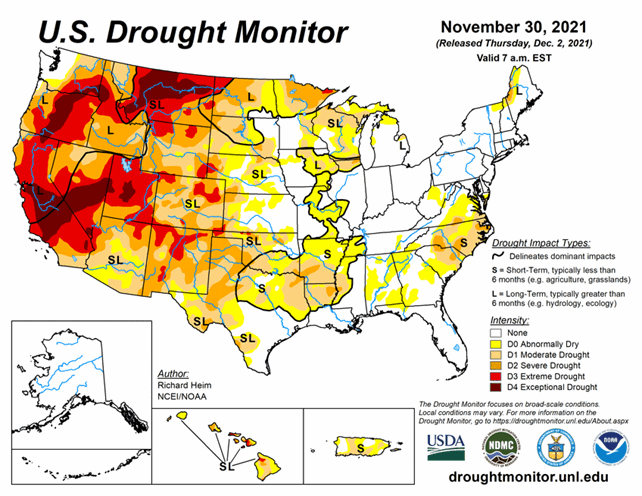 The upper-level ridge will dominate the weather over the western CONUS for the first half of the next USDM week, with a couple Pacific frontal systems moving in later in the week.

For December 2-7, the fronts will bring an inch to locally 3 inches of precipitation to parts of coastal Washington and Oregon and the northern Rockies, with 1 to 2 inches in a wide swatch from eastern Oklahoma to the southern Appalachians and north across the Ohio Valley to parts of New England. Half an inch to an inch will spread from the swath to the central Gulf of Mexico coast and across the Great Lakes. Most of the Plains and Southwest, as well as much of Virginia, the Carolinas, and Florida, will receive little to no precipitation. Temperatures are expected to average warmer than normal across most of the CONUS during this period.

For December 7-15, odds favor above-normal precipitation across the West and Ohio Valley, with lesser chances for above-normal precipitation in the northern Plains and along the East Coast. Odds favor near to below-normal precipitation in the southern Plains and southern Florida. Much of Alaska is likely to be wetter than normal. Odds favor warmer-than-normal temperatures across most of the CONUS, with near to below-normal temperatures in the Pacific Northwest and early in the Great Lakes. Alaska is likely to be colder than normal, especially in southern portions of the state.