Nose Pump allows Cattle to Pump their own Water 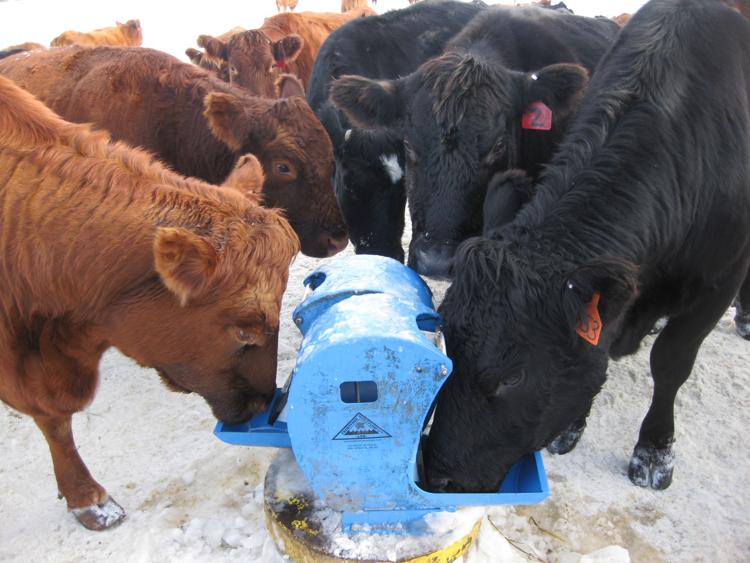 Cold weather presents challenges for watering cattle, especially in areas with no electricity for tank heaters. Jim Anderson, Rimbey Alberta, solved this problem 20 years ago by creating an innovative water system in which cattle pump water for themselves from shallow wells or ponds — water that never freezes even at 40 below zero.

Anderson’s innovation is a piston pump, like the old-fashioned well in which a person works the handle up and down to lift water.

“We modified this so cattle could push a lever with their nose. This operates the piston pump by raising and lowering the piston in the cylinder, the same as a handle did,” he explains.

“Like the old-fashioned hand pump, we have a 3-inch cylinder, down inside the well. This is how we made this pump frost free; we capture enough geothermal heat from the ground, and contain that heat all the way up to the surface, to keep the water in the pipe from freezing,” he says.

The waterer is a small enclosed basin on the top end of a vertical culvert, with a lever that can be pushed. The culvert has 2 feet sticking above ground level, going down to whatever depth is required to make use of ground water or water from the bottom of a pond or dugout nearby. Water from the pond is piped horizontally underground to the bottom of the culvert, where it then rises to the same level as the pond surface — but will not freeze. A buried collection tank from a spring also work. A regular well can be used, as long as the water level comes up to within 50 (and preferably 30 or less) feet from the surface.

“Some ranchers use large pipes, but the typical installation is a road culvert at least 24 inches in diameter, set in the ground 20 feet or more. The factors that determine how much geothermal heat you’ll gain is how deep you go, and how big a diameter pipe you take to that depth. The bigger the pipe, the more heat rises, to keep the water pipe in the center warm enough,” explains Anderson.

Today many folks use these innovative watering systems for cattle, and some are utilizing them for horses and bison.

“One of the government agents we built fences for steered me toward getting a nose pump and we put some on our own place. They work really well,” he says.

He’s had as many as 50 cows on one nose pump and knows of people having 100 cows per pump. One of his neighbors has 700 cows and several nose pumps.

The thing he likes best about the nose pumps is not having to go out and break ice when weather is cold.

“These pumps are inexpensive compared to other water systems, and maintenance-free, so they are a lot cheaper in the long run,” he says.

Sometimes if the nose pump is the only water source in a pasture, it’s hard for young calves to push the lever to get water, so he installed a calf creep and water trough off to the side of one nose pump.

“The cows pump the water, and when it drains out of the bowl after they drink, instead of draining back down the well it is diverted to drain down into the trough for the calves. The cows can’t get to it, and the calves can drink,” he says.

That time of year, when he has baby calves in the pasture, it’s not so cold and the calf trough doesn’t freeze up.