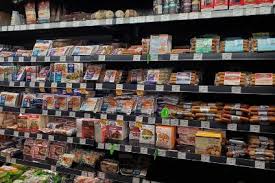 Supermarket chains are revamping their operations to navigate persistent product shortages, expanding storage space and curbing discounts to make sure they don't run out.

Companies plan for shortages of popular brands of food and staples to continue for months, as managers try to keep up as different products run short from week to week, industry executives said. While food supplies overall remain plentiful, Nutella spread, Prego pasta sauces and Pringles chips are among many items that have been tough to secure in recent weeks, some supermarket companies said. Lunchables snacks and Capri Sun drinks have been hit-or-miss for months.

"The fact is, it's like whack-a-mole," Vivek Sankaran, chief executive of Albertsons Cos., said on a conference call recently. "On any given day, something is out of stock in the store."

Ferrero U.S.A. Inc., the maker of Nutella, and Pringles producer Kellogg Co. said they have seen heightened demand for their products. Campbell Soup Co. said it is increasing production and looking to hire to meet demand for Prego sauces. Kraft Heinz Co. said that orders for Lunchables and Capri Sun are exceeding expectations, and that it is accelerating investments to increase production.

Some packaged-food makers, struggling with stretched staffing and hard-to-find raw materials, are limiting shipments of products, companies said. In response, grocery buyers, who are in charge of planning and coordinating orders, are spending more time tracking down vendors, managing trucks that arrive late and searching for substitutes for out-of-stock items. Food retailers are buying extra inventory whenever they can, ordering items months earlier than usual and sending their own trucks directly to manufacturing plants to make pickups and speed up delivery times.

Some retailers are withdrawing discounts to reduce demand. Others are expanding or opening new warehouses. While some executives said stockpiling itself can exacerbate shortages, retailers said they are buying more goods to get ahead of delays and spotty availability. Supermarkets are receiving incomplete or late orders from suppliers and are carrying fewer flavors, sizes or brands.

"You don't want to promote when you can't fill the products," said Neil Stern, chief executive of Good Food Holdings LLC, an operator of Bristol Farms, New Seasons Market and other West Coast retail chains. Consumers typically find it easier to substitute products or switch brands when there isn't a huge promotion going on, executives said.

When Covid-19 began spreading in the U.S. in early 2020, grocery chains struggled with the surge in demand for staples ranging from baking products to toilet paper. As pandemic restrictions lifted this year and the U.S. economy rebounded, food makers haven't been able to find enough workers to fully staff production lines, or drive trucks to deliver goods to stores and warehouses.

Kroger Co. is securing added warehouse space to hold an expanded "safety stock" of more than 70 staples such as baking items and cleaning supplies, according to Gabriel Arreaga, the grocer's chief supply-chain officer. To work around international shipping delays, Kroger is now receiving product deliveries through a broader range of ports and taking on additional carriers to speed up shipments.

Kroger is using its data analytics business to identify substitutes when suppliers can't produce more, Mr. Arreaga said. Other retailers say consumers have been forgiving of shortages and are buying different products or brands.

Supermarkets are trying new tactics to speed up the distribution process. They are adding time slots for drop-offs and creating more aisles in warehouses to increase capacity.

Tops Markets LLC, based in New York State, is picking up food directly from manufacturers and taking full truckloads of one product rather than the typical mix of items, said Kristen Hanson, who oversees the grocer's merchandising. She said she and her team are ordering three months in advance for some products, compared with one week before the pandemic.

"What orders showed up? And who do we need to call? It's our battle every day," Ms. Hanson said.

Associated Wholesale Grocers Inc., a wholesaler serving more than 3,000 locations, started buying supplies of whatever it could find to get ahead of shortages, said Chief Executive David Smith. The company holds 30% more goods compared with a year ago and is expanding its warehouses, with plans to open another next year.

Food sellers' strategies to buy bigger and earlier represents a shift from the "just-in-time" model of holding as little inventory as possible. Industry executives said they plan to continue storing more supply at least for the next several months but don't yet know if the change will be permanent.

Those efforts are adding to supermarkets' costs. Keith Milligan, controller of Piggly Wiggly stores in Alabama and Georgia, said they are holding about $45 million of inventory in total, a nearly 30% increase from typical years. The grocer might reach $50 million in inventory before year-end if it can secure more packaged food such as canned goods.

Other executives said there is only so much they can do to work around shortages. In Massachusetts, Roche Bros. Inc. has been running low on PepsiCo Inc.'s Gatorade drinks for months. The grocer instead tried ordering Coca-Cola Co.'s Powerade and smaller sports beverages from local suppliers to little avail. They are having challenges keeping products in stock too. PepsiCo didn't respond to requests for comment. Coca-Cola said it is working to address supply-chain challenges.

Arthur Ackles, Roche's vice president of merchandising and buying, said: "The problem is people buy more of the other products.