Wet conditions have continued to slowly improve drought in northern California and the Northwest. However, most of the West maintained status quo. Across the U.S., Wisconsin and Michigan and the Carolinas saw drought worsen. As of November 9, 2021, 40.3% of the U.S. and 48.1% of the lower 48 states are in drought. 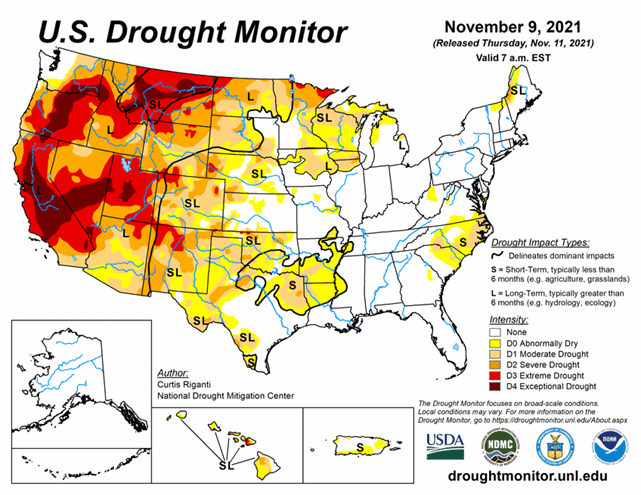 The Weather Prediction Center’s forecast (valid November 10 – 16) calls for multiple rounds of precipitation in the Pacific Northwest. These events are expected to bring heavy rain with local areas of flash flooding. Snow is expected over the high elevations of the Pacific Northwest to the Upper Midwest. A cold front sweeping across the eastern half of the country will bring showers and thunderstorms to the South and rain and rain to much of the East. As the front moves through, temperatures will drop 2 – 5 degrees below normal in the central part of the country and 4 – 9 degrees cooler than normal across the Lower Midwest and Southeast. Temperatures will be 5 – 11 degrees warmer than normal across the West.