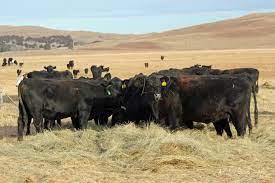 The combination of drought impacts and high crop prices mean that beef cattle producers face significantly higher feed costs this winter.  Increased feed costs have been impacting feedlots for several months and the impacts will grow as cow-calf and stocker/background producers face additional feed and supplement needs this winter.

Prices are higher for both alfalfa and other hay across most of the country with the biggest increases in drought areas but impacting other regions as well.  USDA reported national average alfalfa hay prices up 20.5 percent year over year in the latest Agricultural Prices report for August.  The national average August price for other hay was up 13.4 percent compared to last year.

Markets for hay vary around the country. Alfalfa hay is always important for the dairy industry but use of alfalfa in the beef industry depends on the region.  Some states produce higher proportions of alfalfa, some more other hay and some states produce a balance of alfalfa and other hay. Generally, alfalfa hay production is more important for both dairy and beef production in northern tier states while in the southern regions, the beef industry relies more on other hay with alfalfa hay mostly directed to the dairy industry.

Most cattle producers will need supplemental feed in addition to hay this winter.  The amount and type of supplement needed depends on the type and amount of hay available for beef cattle.  Crop and feedstuffs prices are sharply higher this year led by an export driven corn market.  Current corn prices in the southern plains are 40-50 percent higher year over year.

Soybean meal prices are lower than last year as strong soybean oil prices are driving the soybean crushing market.  However, most other protein and energy feedstuff prices are significantly higher compared to last year.  Prices are higher for cottonseed meal, whole cottonseed, corn gluten feed, distillers’ dried grains, hominy feed, wheat middlings and other common supplemental feed ingredients.  However, the amount of increase varies by ingredient type and source.  Producers are encouraged to shop around and evaluate a range of supplement alternatives.

With higher prices for hay and supplement feeds, producers can reduce winter feeds costs with enhanced management.  The process begins with understanding nutritional requirements of cattle by stage of production.  Testing and weighing hay will help determine the nutritional contribution of hay to meet cattle needs.  Careful feeding of hay can help reduce waste and make hay stretch farther.  Determine the additional needs for protein and energy and source supplement feeds that provide needed nutrients.  This is a good year to put some extra effort into feed management.