Hit-or-miss storms for the Great Plains and Midwest led to some areas seeing precipitation and others nothing, leading to drought improvements right next to degradations. Meanwhile, the West mostly held at status quo, with 52.7% of the western U.S. in Extreme (D3) to Exceptional (D4) Drought. As of October 5, 2021, 39.7% of the U.S. and 47.5% of the lower 48 states are in drought.

Several storm systems impacted various regions of the country this week as the transition to autumn continues. Temperatures through the Midwest and northern Plains remained unseasonal with departures of 9-12 degrees above normal. As cooler air came into the West, temperatures were 3-6 degrees below normal in the region and into the Southwest. The Pacific Northwest had several rain events that brought needed moisture into the region. Areas of eastern Arizona, New Mexico and Colorado also had above-normal precipitation for the week. A slow-moving cold front brought with it a line of showers from the Dakotas into Texas. This slow-moving rain maker brought relief to many dry areas of the Plains. Dry conditions dominated the northern Rocky Mountains as well as the coastal regions of the East from the Mid-Atlantic into Florida. 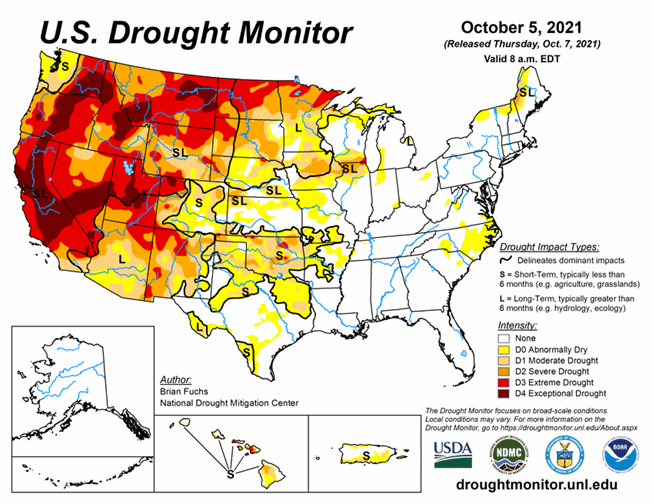 Over the next 5-7 days, it is anticipated that warmer than normal temperatures will continue to dominate the eastern United States from the Rocky Mountains to the Atlantic coast. Temperatures will be warmest over the Great Lakes region where high temperatures will be 12-15 degrees above normal. The West will have below-normal temperatures with departures of 3-6 degrees below normal throughout the region. The best chances for precipitation will be over the Southeast, with areas of northern Georgia and Alabama and eastern Tennessee projected to record the most rain. The coastal regions of the Pacific Northwest look to stay wet, and wet conditions are anticipated over Nevada, Utah, western Colorado, Wyoming, Idaho and southern Montana. Up to an inch of rain is also anticipated over the northern Plains and Midwest.