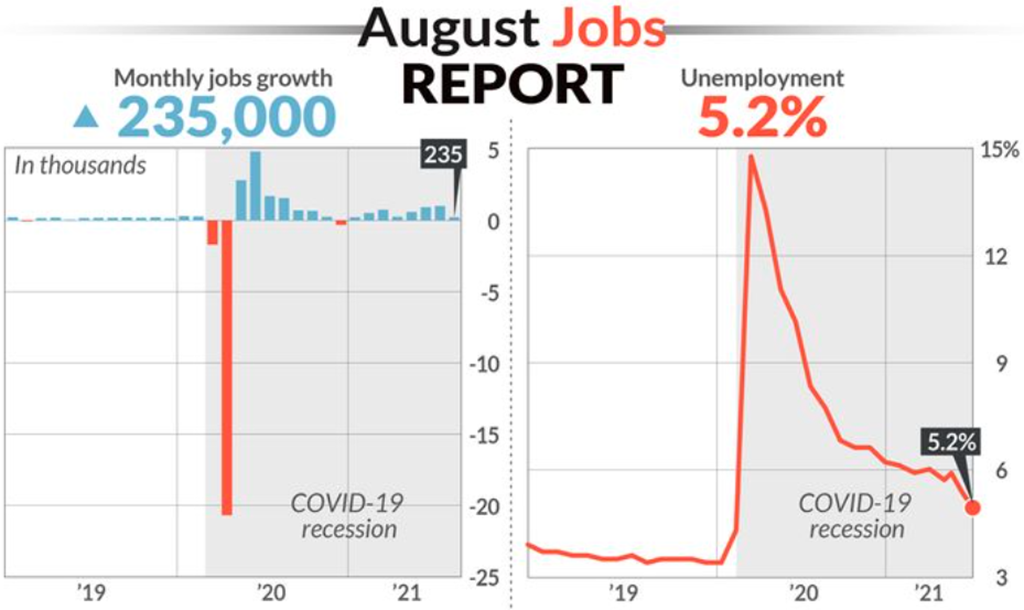 The numbers: The economy created a disappointingly small 235,000 new jobs in August amid another major coronavirus outbreak, raising questions about whether the Federal Reserve will delay plans to start weaning the U.S. off its easy-money strategy.

The increase in new jobs was the smallest in seven months and fell well short of Wall Street’s forecast. Economists surveyed by The Wall Street Journal had forecast 720,000 jobs would be added.

The private sector generated only 243,000 new jobs, for instance, and employment in leisure and hospitality — the part of the economy most sensitive to the coronavirus outbreak in the country — was flat.

The small gain suggests the rapid spread of the delta strain of the coronavirus drove a lot of companies to temporarily freeze hiring plans, especially for customer-facing positions.

Another problem is a lack of available workers.

Millions of people who had jobs before the pandemic still haven’t returned to work and businesses have been complaining about a labor shortage for months. They’ve been raising wages to try to lure workers, but so far it hasn’t been enough.

The unemployment rate, meanwhile, dropped again to 5.2% from 5.4% and touched a new pandemic low. The official rate underestimates the true unemployment by a few percentage points, economists believe.

One big caveat: The last full month of summer is notoriously difficult to forecast because of the so-called August effect. The first report often underestimates job creation. Read: Beware the dreaded ‘August effect’

Big picture: The faint increase in hiring in August is probably just a temporary setback.

While delta caused some companies cut back on hiring out of caution, most still plan to add jobs in anticipation of the delta wave receding. Job openings topped 10 million for the very first time in June and layoffs were at a record low.

The biggest problem for most companies is finding enough workers, even with unemployment still relatively high. They’ve got lots of demand for their goods and services but can’t keep up because of a surprisingly tight labor market.

The hope is that more people will reenter the labor force in the fall as schools reopen and extra unemployment benefits put in place during the pandemic go away. Those benefits are set to expire Sept. 6.

The Fed, for its part, has said it would begin to reduce, or “taper,” bond purchases this year if hiring remained strong. The tepid August report probably just pushes the central bank’s announcement out to November or December.

The central bank has kept a fragile economy on life support since the onset of the pandemic by keeping interest rates at record lows. The Fed has accomplished its goal largely by buying $120 billion a month in Treasury bonds and mortgage-backed securities.

These purchases have pushed the stock market to record highs, some critics contend, and could lead to a selloff once the Fed begins to tighten monetary policy.

Key details: The freeze in hiring among companies that provide leisure and hospitality was a big surprise.

Restaurants, hotels, vacation resorts, entertainment venues and the like had added an average of 364,000 new jobs in each of the previous four months. Delta caused some customers to stay away in August and forced businesses to delay hiring plans.

Hiring should rebound if delta cases continue to level off, however. The viral outbreak might be peaking.

The biggest increase in hiring was among professional firms that employ a lot of white-collar workers. They added 74,000 employees.

Record job openings and an ongoing labor shortage drove wages higher again in August. Many companies have boosted pay or offered bonuses in an effort to fill empty positions.

Hourly pay jumped 17 cents to $30.73 an hour in August. Over the past 12 months wages have risen 4.3% and are trending well above pre-pandemic norms.

In a bit of good news, the government said combined employment gains in July and June were 134,000 higher than originally reported.