Open weather across much of the country favored summer crop maturation and fieldwork, including harvest efforts and winter wheat planting. By September 12, more than one-third (37 percent) of the U.S. corn was fully mature, while 38 percent of the soybeans were dropping leaves, versus respective 5-year averages of 31 and 29 percent. Meanwhile, among the 13 major production states that have planted some winter wheat, all except Oregon were at or ahead of the 5-year average pace. Oregon’s delay—4 percent planted, versus 7 percent on average—can be attributed to producers’ hesitancy to sow winter wheat due to drought. Rain was observed, however, in several regions, including parts of the South and East. Portions of the Gulf Coast region had to contend with Hurricane Nicholas, the eighth Atlantic Basin tropical cyclone to make a U.S. landfall in 2021. Nicholas, briefly a Category 1 hurricane, moved ashore on Texas’ Matagorda Peninsula around 12:30 am CDT on September 14, delivering heavy rain and gusty winds to the middle and upper Texas coast.

Aside from the western Gulf Coast region, some of the heaviest rain (locally 4 inches or more) fell in northern New England, chipping away at lingering, long-term drought. Locally heavy showers also dotted the lower Southeast, including Florida’s peninsula. Lower Southeastern rainfall was enhanced by the arrival and passage of minimal Tropical Storm Mindy, which made landfall on St. Vincent Island, Florida, at 8:15 pm CDT on September 8. Mindy’s sustained winds were briefly near 45 mph, followed by weakening the following day as the remnant circulation moved northeastward across northern Florida and southeastern Georgia. Late in the drought-monitoring period, showers and thunderstorms provided some limited drought relief in the upper Great Lakes region. Elsewhere, fleeting showers dampened some of the driest areas of the West, temporarily aiding wildfire containment efforts. However, hot, dry weather soon returned across the West, limiting the overall benefit of the precipitation. In fact, temperatures broadly averaged above normal across the western half of the country. 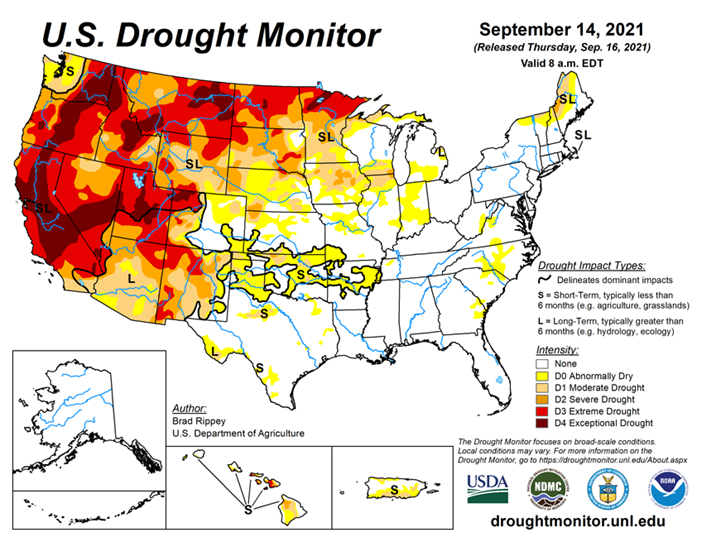