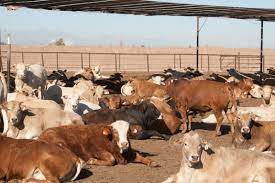 Preliminary weekly data from USDA-AMS through the end of August shows that year-to-date cattle imports are down 21.0 percent year over year.

The latest monthly trade data shows that July imports of Mexican cattle were down 37.5 percent year over year.  Mexican cattle imports for the first seven months of the year were down 18.7 percent compared to 2020.  Preliminary weekly data from USDA-AMS through the end of August shows that year-to-date cattle imports are down 21.0 percent year over year.

Mexican cattle enter the U.S. through one of eleven ports along the border including six in Texas (Columbia Bridge, Eagle Pass, Del Rio, Hidalgo, Laredo and Presidio); two in New Mexico (Santa Teresa and Columbus); and three in Arizona (San Luis, Nogales, and Douglas). In 2020, the Arizona ports accounted for 26.6 percent of total cattle imports (all at Nogales and Douglas; no cattle have crossed at San Luis for several years); New Mexico accounted for 49.4 percent of total cattle imports and the Texas ports accounted for 24.1 percent of the total. Santa Teresa, New Mexico is by far the largest port for cattle, accounting for 42.1 percent of total cattle imports in 2020 and just over 50 percent thus far in 2021.  The two New Mexico ports along with Presidio, Texas all border the state of Chihuahua, meaning that the majority of U.S. imports of Mexican cattle originate in or pass through the Mexican state of Chihuahua (e.g. 55.1 percent in 2020).

Several factors likely contributed to the increase in Mexican cattle imports in 2020 and the decrease this year.  The already struggling Mexican economy was hit hard by the pandemic, further weakening beef demand last year.  Related to that, the Mexican Peso weakened sharply in 2020, going from 18.8 pesos/dollar in January to 24.2 pesos/dollar by April, a loss of nearly 29 percent of value.  A weaker Mexican currency provides additional incentive for cattle producers to preserve value by exporting more cattle.  The Peso recovered value by the end of the year and is nearly back to pre-pandemic levels.

Drought was also a significant issue in Mexico in 2020 and may have added to the export total last year.  Drought continued to build through the winter dry season and conditions looked very bad in June of this year.  However, the summer wet season has brought good rains and pasture conditions are markedly improved currently.  It is possible that good forage conditions is delaying some cattle marketings until later in the fall.  However, November and December typically account for about 24 percent of annual cattle imports and it appears that normal seasonal patterns are likely.

The Mexican cattle feedlot industry continues to grow but remains heavily dependent on imported feed grain and will continue to struggle with higher feed costs.  However, cattle and beef prices are higher in Mexico in 2021 with expectations for additional improvement in market conditions into 2022 along with other North American markets in the U.S. and Canada.