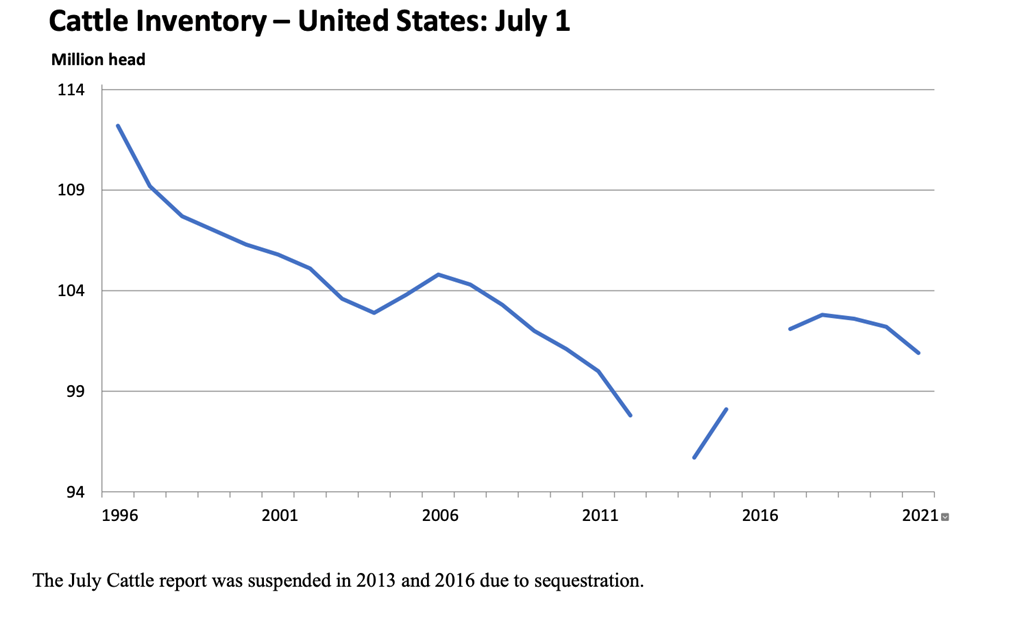 The definition of long-term varies by person. For instance, at the age of five, church service on a wood pew was long-term, and Christmas was always an eternity from today. Now days, church service flies by, children never sleep long enough, and birthdays always seem to be right around the corner. Cattle producers may still have different definitions of what they consider to be long-term in the cattle business. For the purposes of this discussion, long-term is anything exceeding a year, because most cattle producers make decisions for the current production year. Thus, the goal of this article is to discuss some of the long-term impacts of the July 1 Cattle Inventory report.

What do these inventory values mean for the cattle markets in the long-term? The one-line answer is that the cattle market should be in a “bull” market the next two to three years, but that is not a sufficient response to assist with planning and decision making. Thus, a more detailed explanation is needed.

The cattle market is expected to strengthen over the next two to three years primarily due to a reduction in the calf crop and the number of cattle expected to go on feed. These two numbers will be driven by the long production cycle that is required for producers to expand the size of the beef cow herd. However, the expansion of the cattle herd will most likely be delayed in the Western United States and the Northern Plains due to severe drought forcing more cows to be moved and fewer heifers to be retained in those regions. Thus, regions experiencing good forage conditions may begin to expand the cattle herd in 2022 which will be revealed in the 2023 inventory report. Alternatively, those in drought stressed regions may be delayed in responding to higher cattle prices, because sufficient production resources may not be available to make such decisions.

Assuming the calf crop expectation is correct, this would suggest a reduction in supply, which should support prices in the cattle complex. If that reduction in supply is coupled with what has been strong domestic and international beef demand, cattle prices are expected to be further supported. This brings to question at what level will prices be supported and for how long will prices be supported?

Cattle prices have already demonstrated considerable strength in the third quarter of 2021. This strength is expected to spill over into the fourth quarter despite softer prices relative to the third quarter. Prices should continue gaining momentum heading into the spring of 2022 before following a fairly seasonal price pattern in 2022. This would mean 2022 prices should exceed prices in 2021, but cattle prices in 2023 are likely to exceed those experienced in 2022. The price increase will slow a little in 2023 and could continue to be supported in 2024 before increased inventory places pressure on prices.

It is obvious specific prices were not discussed here, because many factors will be at play in determining prices at a specific point in time. It is possible that 500 pound steers reach a price of $180 per hundredweight in the spring of 2023 with yearling cattle prices reaching $175 in the summer of the same year, but understanding the general trend in prices is more useful than the specific price when it comes to long-term decision making.

Some readers may still consider this to be a short-term outlook compared to a long-term outlook, but it is tough enough to predict prices three months out, much less three years in the future. For instance, who could have predicted my wife would stay married to me for five years? For some that is long-term, but for my wife, it has probably felt more like an eternity!