Flash drought continues to hammer the Southern Plains, but rain is coming.

Another newer area of concern is the Illinois–Wisconsin border: Extreme Drought (D3) was re-introduced 2 weeks ago where the border meets Lake Michigan, and Severe Drought (D2) stretches to Iowa. In the West, the northern Rockies saw drought degradations this past week, while the Southwest saw some improvements. As of September 28, 2021, 40.1% of the U.S. and 47.8% of the lower 48 states are in drought. 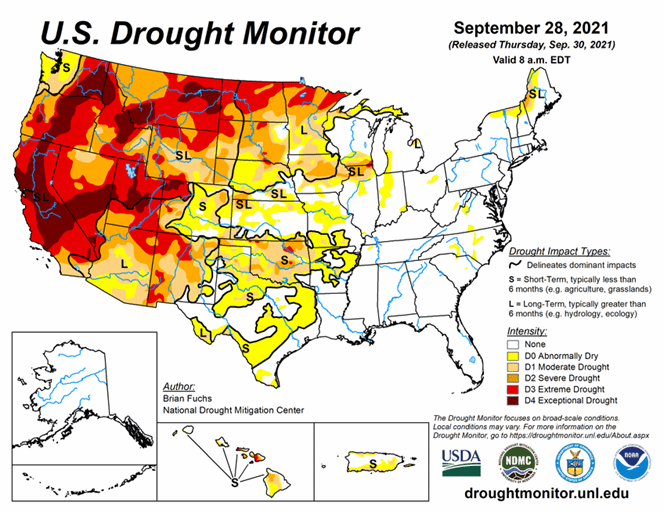 Warm and dry conditions dominated much of the western half of the United States while some needed rain fell on portions of the Midwest, Mid-Atlantic, and into the Northeast. Some late summer precipitation also fell in the deserts of Arizona and New Mexico as well as along the coastal regions of the Pacific Northwest. As the 2021-22 water year came to a close, the West, northern Plains and upper Midwest had the poorest recorded precipitation while portions of the South and Southeast have recorded 110-150 % of normal precipitation during this time. Over the last week, temperatures were well below normal in the South and Southeast with some areas of Alabama and Mississippi at 4-8 degrees below normal. The warmest temperatures were in the northern Rocky Mountains and into New England where readings were 6-8 degrees above normal.