Drought is coming to the South and improving in the North (to a modest degree). According to the latest U.S. Drought Monitor, the Northwest, Northern Plains, and Minnesota saw improvements this week. However, flash drought has hit the Southern Plains into Arkansas. As of September 21, 38.98% of the U.S. is in drought, including all or part of 27 states and Puerto Rico.

For much of the drought-monitoring period, the remnants of Hurricane Nicholas continued to produce heavy showers across the South. Toward the end of the period, residual tropical moisture was drawn northward in advance of a strong cold front, further enhancing rainfall in several areas.

At the Tuesday morning (September 21) cutoff, rain was falling in several areas - including parts of the Midwest - that have been experiencing dryness or drought. Meanwhile, the Northwest also received some precipitation, including high-elevation snow, providing limited drought relief. In many sections of the country, however, dry weather favored summer crop maturation and harvesting, but reduced topsoil moisture for newly planted winter grains.

Some of the most significant short-term dryness, aggravated by late-season heat, existed across the southern Plains. Mostly dry weather also prevailed across the nation’s southwestern quadrant, including central and southern California. Near- or above-normal temperatures covered much of the country, except briefly in the wake of the previously mentioned cold front. 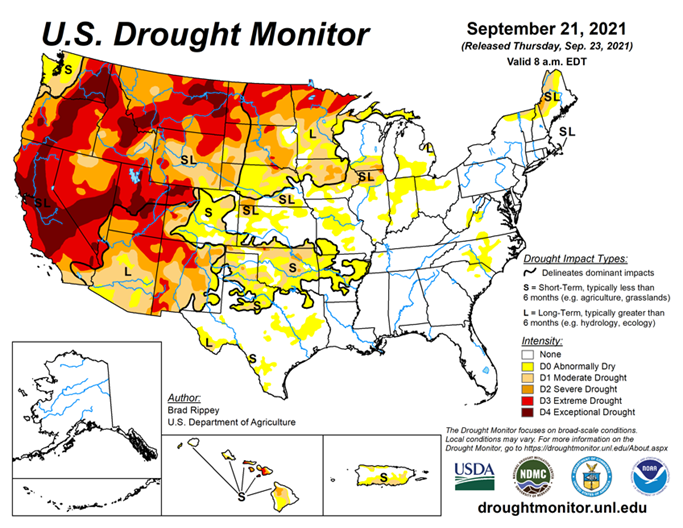