This U.S. Drought Monitor (USDM) week saw continued improvement in conditions across drought-stricken areas of the Central and Northern Plains states as well as in Iowa and Minnesota where light-to-moderate rainfall accumulations were observed. Despite recent precipitation in the Northern Plains, hay shortages and the associated costs of purchasing and transporting supplemental feed are forcing some ranchers to sell livestock. In response to the emerging situation, the U.S. Department of Agriculture (USDA) announced expansion of emergency assistance through the ELAP program to help cover feed transportation costs for drought-impacted ranchers.

In the Northeast, the remnants of Hurricane Ida brought intense, heavy rains (5 to 10+ inches) and devastating flooding to areas of Pennsylvania, New Jersey, New York, and Connecticut. In the Southeast, short-term dryness (past 30- to 60-day period) and declining soil moisture and streamflow levels led to degradation on the map in portions of the Carolinas. In the South, short-term precipitation shortfalls and declining soil moisture levels led to some degradation of conditions in areas of Arkansas and Oklahoma that have largely missed out on recent rainfall events. Out West, dry conditions prevailed across most of the region this week. However, some beneficial rainfall was observed across isolated areas of the Southwest in association with the remnants of Hurricane Nora. 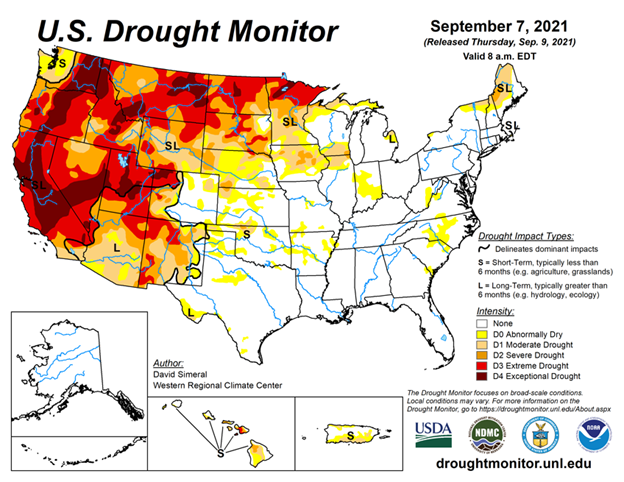