This U.S. Drought Monitor (USDM) week saw widespread improvements across areas of the Midwest and eastern portions of the Central and Northern Plains states in response to beneficial rainfall. Rainfall accumulation in these areas ranged from 2 to 12+ inches leading to one-category improvements across areas of the Dakotas, Nebraska, Kansas, Iowa, Minnesota, and Wisconsin. In the South, Hurricane Ida made landfall along the Gulf Coast of Louisiana on Sunday as a Category 4 hurricane with maximum sustained winds of 150 mph. The hurricane caused extensive infrastructure damage including widespread power outages in Louisiana and Mississippi, impacting more than 1 million homes and businesses as well as stranding residents amongst the floodwaters. In the West, dry conditions persisted across most of the region with approximately 90% of the region currently categorized as “in drought”.

In California, two major wildfires (Dixie and Caldor fires) continued to intensify and expand due to the dry and windy conditions. In El Dorado County, California, the Caldor Fire continued to rapidly spread this week leading to the evacuation of residents in communities on the southern end of the Lake Tahoe Basin—including the City of South Lake Tahoe. In addition to impacting fire conditions, the on-going drought in California continues to strain the state’s water resources. This is reflected in the reservoir levels of California’s two largest reservoirs, Lake Shasta and Lake Oroville, which are currently at 43% and 34% of historical averages, respectively. In the Southwest, Lake Powell is currently 31% full and Lake Mead is 35% full. The total Lower Colorado system is at 40% full, according to the U.S. Bureau of Reclamation, compared to 50% full at the same time last year. 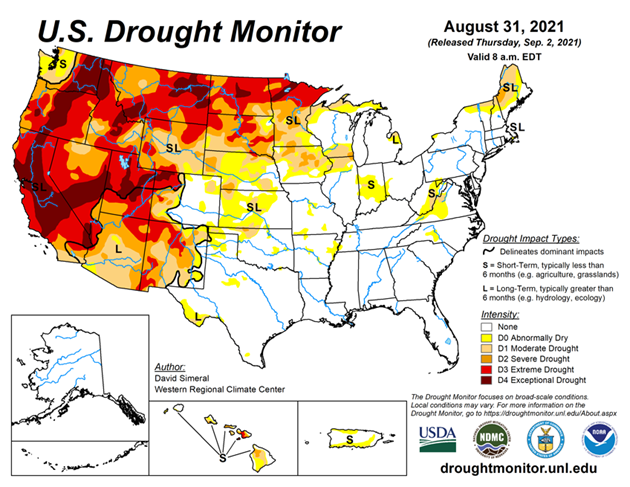