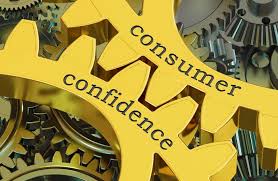 U.S. consumer sentiment was little changed in the second half of August, remaining at pandemic lows as concerns over the spread of the Covid-19 Delta variant unsettled households.

The final reading of the index of consumer sentiment compiled by the University of Michigan was 70.3 in August, virtually up from the mid-month flash estimate of 70.2 but down sharply from July's 81.2, data released Friday show.

The reading is below expectations from economists polled by The Wall Street Journal, who forecast consumer sentiment index to come in at 71.0.

"There was no lessening in late August in the extent of the collapse in consumer sentiment recorded in the first half of the month" said Richard Curtin, the survey's chief economist.

The drop in consumer sentiment in August left the index at a 10-year low, well below the 101.0 level registered before the pandemic in February 2020.

The losses in sentiment were especially large in the expectations index, and widespread across all demographic groups, regions and the outlook for the economy, Mr. Curtin said.

The index of consumer expectations, which reflects the balance of respondents anticipating improved business conditions in the next six months, decreased to 65.1 from the 79.0 reading registered in July, and was broadly unchanged from the preliminary estimate of 65.2.

The index gauging Americans' assessment of the current economic conditions fell to 78.5 in August from 84.5 in July. The preliminary mid-month reading stood at 77.9.

The August collapse of confidence doesn't imply an imminent downturn in the economy, Mr. Curtin said. The emotional impact from the pandemic on spending patterns could be behind the current decline in sentiment as consumers' hopes that the pandemic would soon end weren't met, he said.