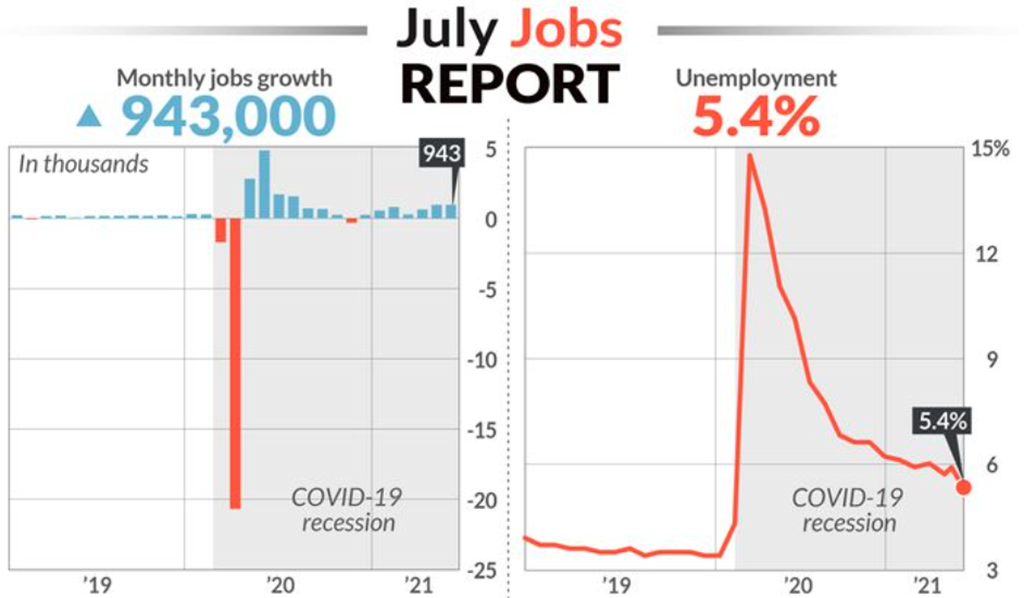 The numbers: The U.S. created a robust 943,000 jobs in July in a sign the economic recovery gained steam and withstood the latest assault from the coronavirus arising from the highly contagious delta strain.

Government payrolls also rose by 240,000, making the strong gain in employment last month look a bit better than it really was. The increase largely reflects seasonal swings in education whose ups and downs have been exaggerated by the pandemic.

The unemployment rate fell sharply to a fresh pandemic low of 5.4% from 5.9% in June, the government said Friday. Yet the official rate likely underestimates true unemployment by two to three percentage points, economists say.

More encouraging, the percentage of people either working or looking for work rose a tick to 61.7% in July. The so-called labor force participation rate has been depressed since last summer with millions of previously employed Americans still missing from the workplace.

Many economists predict more people will rejoin the labor force in the fall after schools reopen and extra federal benefits put in place during the pandemic expire. A lack of labor is partly holding back an otherwise robust U.S. economic recovery.

Yet some are more doubtful. They contend many of the jobless either lack the skills companies want or don’t live in areas where demand for workers is greatest. A wave of up to 2 million retirements during the pandemic has added to the labor shortfall.

The U.S. stock market opened higher after the jobs data was published. The report is unlikely to nudge the Federal Reserve to speed up its plans to withdraw its support for the economy, but it puts the central bank one step closer.