Monsoonal moisture, and associated heavy rainfall, returned to Arizona and New Mexico after a brief hiatus last week, leading to widespread improvements in drought conditions, as well as some flash flooding. In most of Arizona and New Mexico, long-term drought remains, but recent conditions have been wet enough for a green-up in vegetation. Meanwhile, warm and dry weather continued from the West Coast to the northern Great Plains. Tropical Storm Fred, and its remnants, progressed across the Southeast U.S., dropping heavy rain along the storm’s track, and to its east as well. Much of the rain in the drier areas of North Carolina, Virginia, and West Virginia fell after 8 a.m. EDT on Tuesday, so the effects from this heavy rain on dryness will be incorporated into next week’s analysis. However, some limited improvements to conditions did occur with rainfall before the Tuesday morning cutoff.

Water shortages and wildfires continued to plague drought-stricken regions of the western and northwestern U.S., while very poor soil moisture conditions and severe agricultural impacts were felt in the northern Great Plains. In Minnesota, hydroelectric power generation along the Mississippi River halted near St. Cloud. River levels in the state lowered towards 1988 drought levels, creating a danger for boats to scrape along the bottoms of rivers. Rainfall from tropical cyclones in Puerto Rico led to improvement in moderate drought in southeast sections of the island. Maui and Hawaii also saw localized improvements of drought conditions from recent rainfall. 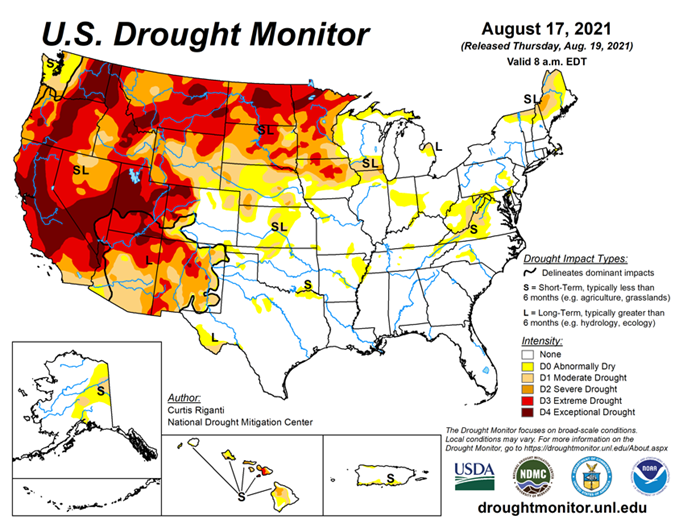