The Northern Plains and MN took the brunt of degradations in this week's U.S. Drought Monitor with a large expansion of Extreme Drought (D3). Plus, Exceptional Drought (D4) was added to MN for the first time in U.S. Drought Monitor history. The Northwest saw degradations and the Southwest improvements, but not to the degree of recent weeks. As of August 10, 2021, 39.98% of the U.S. and 46.8% of the lower 48 states are in drought.

Monsoonal moisture was squelched this week, in contrast to the heavy rainfall that had been pelting the southern Rockies and – to a lesser extent – much of the interior West. Totals between 1 and 2 inches were limited to a few patches in southeastern Arizona, central and south-central New Mexico, and scattered higher elevations in central Colorado and central Montana. West of the Plains, only part of northwestern Montana and northwestern Washington saw fairly widespread amounts of 1.5 to locally 3.0 inches.

Farther east, significant rainfall evaded most areas of dryness and drought from the Plains to the Atlantic Seaboard, with a few dramatic exceptions. Most of interior Wisconsin recorded 2 to 5 inches of rainfall from north of Milwaukee into far southeastern Minnesota. Moderate to heavy rains were not as widespread elsewhere, with amounts exceeding an inch covering relatively small areas. The scattered areas of heavy rain included northeastern and part of southern North Dakota, northeastern South Dakota, a few areas from central Minnesota southward into central Iowa and southeastern Nebraska. Similarly, widely-scattered areas of 1 to locally 3 inches dotted the Midwest, lower Ohio Valley, central and southern Appalachians, and northern New England. But most of these regions recorded light precipitation, and other areas of dryness and drought across the contiguous states saw little or no precipitation. 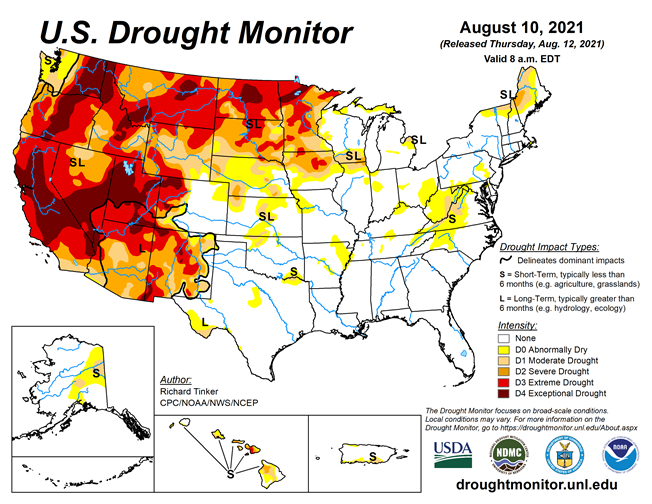