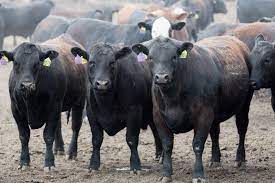 Now looking at the prices. The weekly weighted average cash steer price for the five-area region was $120.77, which was $2.05 lower compared to the previous week and last year the same week it was $97.24 which was about $0.90 higher that week last year. The same week in 2015 it was $145.48 even though the daily Choice cutout now was still 36 dollars higher. This week the current five area weighted average live steer formula price was $123.13 and the live formula heifer price was $123.65.

The estimated weekly total FIS cattle harvest for week ending July 24 was reported at 648,000 head and compared to 640,000 head the same week last year. The year to date total is now over 800,000 head higher than last year.

Choice-Select spread on Friday was at 16.69 compared to 16.15 the previous week and that compared to 11.14 spread last year.

The daily spot Choice box beef cutout ended the week on Friday July 23 at $266.63 which was $1.31 lower compared to previous Friday which is now about $71 lower during the last six weeks. However, it is still much higher than all previous years yet. Last year it was $201.77 on the same Friday, which was about $1 higher. During 2015 it was $230.70 on the same Friday so still about 36 dollars higher yet.

The end of this week the daily Choice Chuck and Round primal were $4 to $6 lower and they both have been creeping lower but still much higher than all previous years now. The daily Choice Rib was $22 higher and Loin primal was $2 lower but the Rib had already dropped about $170 lower. The weekly total for the daily cutout was 687 loads and about  8 % of the weekly total loads sold.

The total sales were 8011 total loads sold for the week which was 1020 loads higher than the previous week and the biggest number in many weeks helped by the exports.

The out-front sales which get delivered after 21 days were 2281 loads which was 670 loads higher than last week and no doubt included some exports. The largest out-front sales this week included about 2.5 million lbs of Choice Round products that were steady to only 1 lower priced than the same current formula prices, so good volume and good prices.

The exports as reported on the Box Beef report were 1831 loads which was 1103 loads higher compared to the previous week and the biggest number in quite a while. This week 89 loads were sold to our NAFTA neighbors and 1742 loads were going overseas.

Formula sales were at 3453 loads which was 148 loads higher than last week and about 43 percent of the total loads sold this week.

Taking a look at the major primal cuts which impact the cutout value and the weekly average numbers include all of the different types of sales. The weekly average Choice Chuck and Round primal were 5 to 6 lower but still higher than all previous years now which had stopped the cutout from dropping lower at a faster rate.

The weekly average Choice Rib primal was 10 higher and the Loin primal was 11 lower so they both continue to follow the movement in the daily prices.