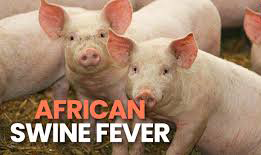 CHICAGO, July 28 (Reuters) - The U.S. Department of Agriculture confirmed the deadly hog virus African swine fever in samples from pigs in the Dominican Republic, the agency said on Wednesday, fueling concerns about the disease creeping closer to the United States.

The positive tests represent the first detection of the disease in the Americas in about 40 years, according to the National Pork Producers Council, a U.S. industry group.

No cases have ever been found in the United States. However, infections in the Dominican Republic highlight the risk for the spread of the disease, which devastated China's hog herd after being detected there in 2018.

"The proximity of course is a concern," said Paul Sundberg, executive director of the Swine Health Information Center in the United States.

African swine fever is harmless to humans but often fatal to pigs. It originated in Africa before spreading to Europe and Asia and has already killed hundreds of millions of pigs, while reshaping global meat and feed markets.

The positive samples in the Dominican Republic came from two farms that were geographically separated, Sundberg said, adding that it will be important to determine how the virus entered the country.

"Something happened with DR and we need to know what in order to make sure it doesn't happen here," he said.

Governments often block imports of pork products from countries where the disease has been found to prevent transmission.

The U.S. Department of Homeland Security's Customs and Border Protection (CBP) is increasing inspections of flights from the Dominican Republic to ensure travelers do not bring prohibited products into the United States that could carry the virus, according to the USDA.

"We thank the USDA and CBP for the additional measures they are taking to prevent the spread of ASF to the United States," said Liz Wagstrom, chief veterinarian for the National Pork Producers Council.

African swine fever spread rapidly in China starting three years ago and wiped out half the country's hog herd, the world's largest, within a year. It sent global pork prices surging.

The disease has also been found in Germany, Poland and the Czech Republic.